Because I Enjoy The Death of Children

Okay, I don't really enjoy the death of children. But I did enjoy The Hunger Games. So much so that the three books get their own Quick Review. 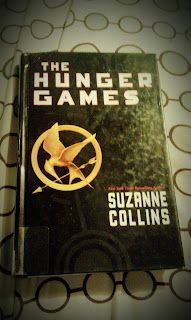 The Hunger Games
By Suzanne Collins
Rating on Goodreads: **** of *****

I avoided this books for a long while because I hadn't seen the movie. Then my mom sent me a care package, and I got an hour and twelve minutes in, and it froze while Katniss was tying herself to a tree. So I took it to Wal Mart, got a new one, and resumed the following night. I was shaking by the time it ended. Then I only had one conclusion, I must read this book.

I was blown away. Mainly because I was NOT impressed by the writing (I felt like there was too much telling and not enough showing, parts where dialog could have been included when it wasn't, etc), but I still found myself staying up til 2-3am reading. I literally devoured this book. And even though I knew what was coming, I found myself sobbing to the point I had mascara streaks down my face. (Not exaggerating. My roommates told me I looked like crap).

The movie did a good job, but there were some key elements I found left out.

It also rocked because at my local library I discovered the joy of Large Print Books. Don't knock em til you try them. They'll rock your world. 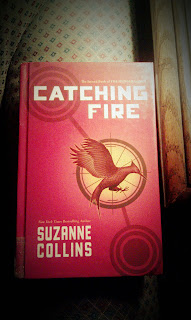 I was going to wait awhile before grabbing this book, but then the librarians told me they had it in, AND it was in Large Print, too. I couldn't exactly refuse.

I wasn't as drawn into this book as I was the first. Somewhat expected as it was a sequel, and my world hadn't been rocked by the movie. It was still very good, but it was a little harder to forgive the telling vs showing issues I had in the first book.

The one thing I give Collins TONS of credit for is her ability to leave you hanging at the end of a chapter. The last sentence always knocks the wind out of you, and forces you to keep going. 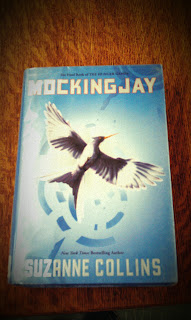 Mockingjay
By Suzanne Collins
Rating on Goodreads: **** of *****

Katniss went crazy in this book, and I loved it. I appreciated how haunted she was from the first games, because I feel like other authors would have glossed this over. She's a seventeen year old girl, and she's killed people. You don't just brush that off.

This book I thought did a great job of showing how far things got out of control, not really knowing who is the good guy and who is the bad guy anymore.

Another great round of cliff hanging chapters. Still some telling/showing issues, but overall a great quick read. I was more invested in this novel than the second one.

Another Large Print Book. I'm telling you, they're the way to go :)

If you were debating whether or not to read the books. Read them. They're awesome.

Also, are you my friend on Goodreads yet?
Posted by Lynn(e) Schmidt at 9:37 AM