So the other day just as I was getting ready to leave for work, Baxter decided it would be super cute if he ran off and tried to play with the dog next door. I had less than two minutes before I had to be on the road. I screamed at him to come back, went to go after him but the snow was real deep and I didn't want wet shoes for work, so instead, I stood there, fuming (flames were being thrown from my eyeballs in his general direction).

I came to the conclusion, "Sometimes, I wish he'd just get attacked so he'd learn his lesson."

With that said, because you all know how much I love lists, here is a list of pet-pet-peeves that I have. Those little things that pets (mine or yours) do that annoy the crap out of me, and make me consider dropping Bax off in a parking lot and running the other way. (Kidding...sort of.)

Okay, this one isn't their fault. But, in the state of Maine, it's pretty prime to hunt, right? Well, they're kind of idiots here, and they like to shoot things; people, horses, deer, dogs...If it moves, they think it's worth shooting.

Come hunting season, you wear bright orange (or something bright) when you walk outside or down the street. Worried about Baxter tramping off in the woods, I found this bandanna and put it on him (because he's the size of a small pony).

Every time I let him outside, I held my breath, waiting for the day I heard a gun shot, and would have to go knife a hunter. (Thankfully, that never happened, though a few mornings, the shots were real close to the house.)

My sisters and I raise our animals that they are NEVER, EVER allowed on the kitchen table or the counters.

Well where I'm living that doesn't seem to be a rule. (Than again, the poor cat is terrified of Bax and treed herself when we first moved in.) It's icky, and it just makes me think the animal is disrespectful. 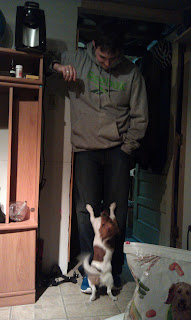 3) Thinking They're Allowed Wherever

I tend to take for granted the fact that Baxter is a rockstar. If I have crap on the bed, he'll stand there and stare at me like, "I'm gonna need you to move that, k, thanks." He doesn't jump on strangers (that's not to say he doesn't rear up like a horse). If I'm sleeping he'll paw around, find my body, and very delicately step over/around me.

I forget not all dogs are like this. Some jump as soon as you walk through the door, some walk all over you as you sit on the couch. These dogs kind of make me want to punch them in the head.

Then, when I leave that place and go home to Baxter who wags his tail so hard I get bruises on my legs, I hug him super tight. (Best. Dog. Ever.) 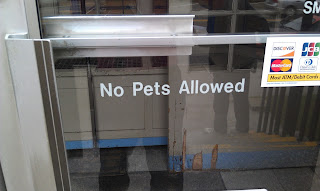 While you can have an awful pet who steps on me, chews on my hands, does whatever, nothing bugs me nearly as much as these signs. I loathe the fact that Baxter isn't allowed in stores (other than the lovely PetsMart), simply because he's amazing. And I feel like the public should get to meet him.

Although, the dogs who don't get along well with others.

Those ones should just stay home.
Posted by Lynn(e) Schmidt at 9:28 AM