Blog Award, And Other Fun Things!

It was awhile ago....It seems actually to be July to be exact...But the lovely J.A. Bennett gave me the Blog On Fire Award, and I haven't properly taken the time to redistribute, nor thank. So, Ms. Bennett, thank you for the award.

I honestly don't know how these things work....but it seems most people have posted the picture of the award or what not...so I guess I'll do that: 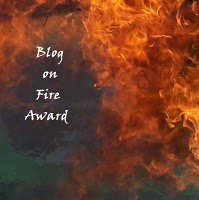 And then I hear that you're supposed to answer some random questions? I'm not sure, but it kinda seemed like fun and I don't have anything else to say today....so here I go:

1. Are you a HOT rutabaga? Describe yourself in two words:
Pet friendly? I don't know....I don't really have anything to say here, but I do love pets...

2. When was the last time you ate lion meat?
Umm....In a past life probably. But I'm not so sure sea turtles are into that kind of thing...I know they eat weird crap...but lion meat? Really? Maybe not in a past life....

3. Upload a heartwarming picture that makes you smile. 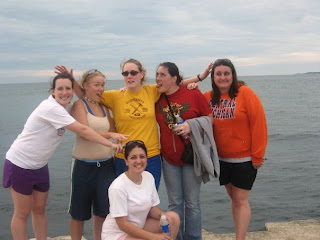 This was in 2007...my sisters, all of them and I took a trip in Michigan to the other side of the state. It was amazing. I love all of them.


4. What songs would be playing when you go back in time to beat the crap out of someone, and who, may I ask, would be this someone unfortunate enough to be in your time traveling dimensional line?
Probably something by Rise Against, or Silverstein. They're pretty angry. Or something like..really silly. If you've ever seen that part in Dirty Work, the G SEVEEEENNNNN! Dude, you just pushed G8 "If you like pina coloadas, and getting caught in the rain". Yea...I could see that happening to me.


5. Name one habit you want to change in yourself because it makes people plot your demise.
I have a bit of a temper.....(Shh...don't tell anyone)

6. How many goats, stacked atop one another like Yertle's Turtles, would it take to reach the moon?
I'd say fourteen. But I'd prefer that before we tested this theory...we asked the goats for their permission.

9. Do you have nicknames?
I have a million of them. The one I hear the most frequently is Knee-Cap. Thank you, Elizabeth.

10. What the fudge were you thinking as you were doing this?
That Hancock is playing in the background, and Will Smith is smokin hot? A little bit of that, and he (Hancock) has some clear anger problems...I like him.

And now I hear this is the fun part. Getting to tag people. I think Ms. Bennett chose four people, so I will, too:

1) Ms. Marilyn Almodóvar  @ Writing on the Sunny Side of the Street

4) Ms. Becky Wallace @ What's Your Thought On That?

So there you have it. My first blog award.

Thanks again :) Sorry it took me so long to respond!
Posted by Lynn(e) Schmidt at 9:37 PM