Book Review: Where She Went 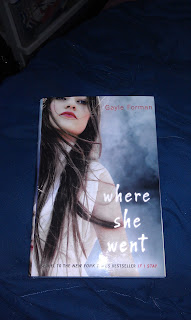 Where She Went by Gayle Forman

This was another novel I received during my lonely Christmas of 2011. This one took two-three days to read, simply because I didn't have an entire day to spend in bed, and I had to be a big kid and go to work. (Yack)

Where She Went is written from Adam's perspective, which I thought was super cool, and would be a challenging thing to do as a writer. (Though if you guys ever get bored, it's always a fun writing exercise!) Forman pulled it off, phenomenally.

One of the things that I loved, and kept me reading was when Adam first sees her, he talks about how he doesn't want to kiss her, or scream at her. He just wants to touch her. (I don't have my book on me, so I couldn't find the exact wording, sorry!) The intensity of those thoughts and feelings were reminiscent of The Last Summer (of You and Me)** by Ann Brashares. It's those tragic loves, that want to run into their arms, but something (time, distance, anger) keeps your feet in place, that I'm drawn to.

One of my first times going home after leaving for college, a friend was getting married. This friend was Alex's best friend, so of course, he was the best man. I wore a nice dress, and sat with my sister and her friends...all of whom hated Alex.

When I saw him, my heart jarred, my palms started sweating. I watched him the entire wedding, during the reception. All I wanted was for him to come to me, say hello, ask me to dance (because he had been my date to almost every single high school dance). But he didn't, and so by the end of the night, I got sick of waiting. I grabbed my jacket, with every intention of storming off, when I stepped on someone's foot. Whose else would it be, except, of course, Alex's?

He leaned so close to me, I could feel his breath when he said, "I know you won't believe this, but it is really good to see you."
And I died inside. I wanted to claw out his eyes, punch him, kiss him, run into his arms, touch his face. Instead, I stood uncomfortably, unmoving, shaking. When I didn't run away from him, he kept talking. The more he spoke, the less I wanted to hurt him, and the more i wanted to just be there, with him. When he told me he'd gotten me maple sugar candy, I almost cried. We'd always gone to the Maple Syrup Festival every year.

The following day, I went to his place and it was one of the last times I saw him. But it was enough to keep me in motion for a long, long time. It's sad because we're not even friends on facebook, and we don't keep in contact, but he got me through high school alive, and mostly unscathed.

Where She Went pushed me over the edge, and I most definitely cried. I cried for Adam, for my high school and young college self. I cried for distance, and lost loves. And Baxter stared at me like I was crazy, until I explained to him why I was crying and to not judge me :)

This is another must read and re-read. But, for full impact, I would encourage reading If I Stay first.