Reasons You Do Not Want Me As A Roommate

I am a severely flawed individual. But, I'm aware of these flaws. It's why I prefer to live alone, with my dog, and rock out to all sorts of Justin Beiber and Mandy Moore. I am not meant to cohabit with others, because I don't play well. With that said....

1) I'm messy.
I live under the Oh, I'll pick that up later, I'm just leaving it here for now, mentality. The truth is, once that shoe is there, I can trip over it fifty times, and STILL not pick it up. You can trip over it, too, yell at me, and I'll wave you off saying "Yea, I'll get it," and then take a nap instead. Because, well, it's more interesting. My car looks like a hurricane swept through. During my basement dwelling days, the four year old I was staying with looked straight at me and asked, "Lynne, why does your car smell bad?" Aren't four year olds supposed to...not notice bad smells?

2) My books are more important than you.
Oh, you want to look at my book? Cool, but don't leave finger prints and DO NOT under ANY circumstances bend the binding. If there is a mark, you're buying me a new book, (I'm not kidding. My sister had to do this because I FLIPPED out on her after reading A Walk to Remember) and if it's a signed copy you've just ruined, you're giving me your soul. Even Baxter knows to steer clear of my books.
There are a few you can handle, most of those are second hand, but even still, I am very protective. For the safety of you, your soul, and your wallet, you may want to...just look. Don't touch. 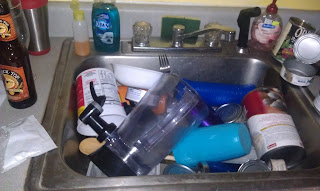 For a time, I figured that living on my own would change this fact, but it hasn't. In college, my roommates and I made a rule that if a boy were coming over he had to do the dishes before hanging out with us. Well, I live alone now, in the middle of nowhere. There is no one to do the dishes, and for that matter, my sister isn't hovering over me saying, "Those are your dishes!" So...yea. I hate dishes. I'd rather chew off my left arm than wash them. I think my sponge may be moldy, too.

4) What's that? Yea, I'm not listening.
I'm pretty self involved. Usually I'm working something out about my writing, or reading, or playing on twitter. The only times I really want to interact with you is so I can later use it in a novel. If that's not possible, then you're useless to me. BUT it is your job to sit there and listen to me while I read entire chapters of my WIP out loud. However, don't offer feedback because you don't read, PLUS you don't write...so anything you say will be incorrect. I know best, okay, thanks. Continue along.
Not only that, but I like to be by myself. I've spent the last two-three months living alone without a TV, and I've LOVED it. Now I'll have to go back to a roommate....and share space...and...mornings...and...space.

5) Do not touch or move my stuff.
I don't care if the strawberries in the fridge are moldy. They are mine, do not touch them. I don't care if you've tripped over my shoe, it's mine, do not move it. The only exception to this rule is if you're doing my dishes, or walking my dog. You can pet my dog, he likes to be pet. My books/shoes/clothes/everything else does not like to be moved. I turn into the Hulk if you touch my stuff. I rip my shirt off and everything. That whole invasion of personal bubble thing. You can trip, but do not touch.

6) Food and laundry detergent.
Food is sacred to a Schmidt. At our best, we are truly primal beings, living off beef flavored Ramen Noodles for survival. Probably because as children we were rarely fed and at least two of us developed eating disorders, but none the less, we guard it. Readily.
So if we treat ourselves to ice cream, or ginger ale, or beer, we become a wild bear, and those goodies are our offspring. If you come between us, you will get maimed. But if yours is left in the wilderness of the refrigerator, I will help myself when you're not looking. But don't you dare do it to me. I'm also not so good at sharing, so don't expect me to offer anything, either.
Then laundry detergent. Granted, if you leave yours in a communal area, I'll probably steal yours.I mean, why waste mine when yours is right there? But if I catch you using mine without permission, I will go nuts and start screaming. (And never admit that yes, yesterday yours was completely full and now it's down to half. Maybe it spilled?)

7) I will tweet about everything.
If we have a fight, if your boyfriend comes over and starts screaming at you, if you leave dog poop on my porch step, if you come into my room completely naked, the entire world will know. It's the digital age, my friend. If you don't want everyone to know, don't be dumb. You're more than welcome to tweet about me, because I will tweet about you. And maybe even blog about you.

8) The monster isn't UNDER the bed. It's IN the bed.
I value sleep more than food, or laundry detergent, or you leaving my stuff alone. A boy once straddled me during a nap and tried waking me up, only to find a fist to his special places. I was too tired to be apologetic. I trained my dog by snaps and hand signals so that for the first half hour I'm awake, I don't have to say anything. So if you see a zombie stepping out of bed, it's best to pretend I'm a T-Rex. Stand still and I won't see you.

9) Passive aggression
I don't like confrontation. Maybe it's from growing up in an abusive household. Maybe it's because I'm an Adult Child, or maybe it's just because at heart I'm chicken sh*t. If you do something like steal laundry detergent, or break my toothbrush, I will leave a note saying something like, "Whoever did this, please replace." Clearly, if it wasn't me, and it wasn't Baxter, it was you. I know this, you know I know. But rather than confronting you about it, I'll just add to the tension.

10) Mental disorders.
Depression runs rampant in my family. Sure, I'm stable now, but there will be times where I'll swim out to the deep end and manage to bring you down, too. Not only that, but I'm 99% sure I have an undiagnosed and untreated bout of Borderline Personality Disorder, which causes self destructive behaviors, negativity, selfishness. Sometimes, when I'm not trying to get myself hurt or arrested, it can be fun. Most of the time....it's not.

I read all of these things to my sister, who I was forced to share a room with during our formative years. Then when we moved to North Carolina a couple of times. She further confirmed that I am a horrible roommate, and should live alone. I'm pretty sure I've opened some wounds she's forgotten about :)

What do you think?