Books I Could Not Stop Reading

Before I delve in to the intense topics, I figured I'd spam you with book suggestions :)

J.A. Bennett does mini-reviews every month. They're small, they're cute, and they make me want to read whatever she read last month. I did one of my own called, "Books You Should Read" in August, and thus this one shall be Books I Could Not Stop Reading. It also kind of fits into YA Highway's Road Trip Wednesday asking, What was the best book you read in September?

In 2011, I met Scott Westerfeld. He actually let me take a sip out of his wine glass, and though I hated wine, I did it because it was Scott Westerfeld and it was a pretty pink drink.

I was blown away by the ideas presented in Uglies. I felt like it was world building at it's finest. Though some parts of the writing felt weak, the overall feelings and horror this book brought out negated any simplistic writing. I could NOT put this book down and stayed up til 3am finishing it (in 24 hours).

I could relate a lot to Tally's plight. You're told one thing all your life (in her case it's that being Pretty will make life easier and better), and suddenly...maybe that isn't what you want or believe anymore. 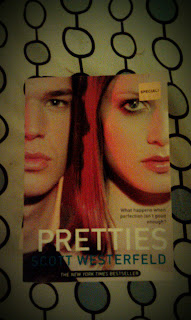 The follow up to Uglies. Though it was still a good read, and fast read, it didn't compare with the first in the series. There was a lot of jumping (from high buildings, from hot air balloons), like, a lot of it, and it took me out of the story.

Plus, it seemed like Tally started getting a little full of herself by the end, which was frustrating. I LOVED Tally in the first book because she was fumbling her way through finding out what she believed in, and in this one, everyone knew Tally Youngblood. They feared her, they hated her, they loved her. She was no longer the Ugly girl I fell in love with.

This one got a three star rating because while it was still a good book with a lot of creative ideas, the simplistic writing was more evident, and I slipped out of the story more than I wanted to. 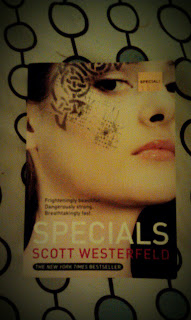 Specials is the conclusion to the Uglies trilogy. (I hear there is Extras, too, but for me this is where I stopped.)

This one lost a lot of momentum for me. I enjoyed the ending (when bombs finally started going off, and people started dying), but I felt like a majority of the start was dragging.

It was still a good book, I still loved reading it, but again, I had issues with momentum, being dragged through the story (or the woods). I still battled with the whole I am Tally Youngblood, which means I am better than everyone else, type of mentality...

What did you guys think of the Triology?


The Motion of the Ocean: 1 Leaky Boat, 2 Average Lovers, and a Woman's Search for the Meaning of Wife I got to meet Janna in 2011 at the PNWA conference. From her quirky presentation, and the helpfulness to baby-authors-in-the-making, I decided I needed her book. I bought it, brought it home, and it's been packed away for the better part of a year.

After reading Looking for Alaska, If I Stay, Where She Went, ( all of which I'm still emotionally recovering from), the Uglies, and other heartbreaking novels, I fell into a literary depression. I looked at the books I could read; more death, more sadness...I needed something upbeat.

And the Motion of the Ocean was the answer. It was a great read about sailing, finding love, questioning love, and finding yourself apart from your significant other. If you're looking for a nice beachy-feel read, this is the memoir for you.