Obessions and a Book Review

My older sister, Laura, is obsessed with World War II. Specifically, of the Holocaust. She owns many books and documentaries on the subject, and when I'm in doubt of what to get her, I just find something about the Nazi's and she loves it.

I, on the other hand, fell into something equally as heart breaking. The shootings at Columbine. Maybe it was because they occured on April 20th, the day after my birthday. Maybe it was because of the way my heart ached when I saw the news coverage. I couldn't and still can't wrap my head around what happened that day, and I don't think anything else has traumatized me the same way.

Honestly, I'm not sure why I became obsessed with the massacre. I just am. One of my life goals is to go to the memorial, feel the deep sadness that resides there. See if I can make it without crying, the way I had when I visited Ground Zero.

Because of this obsession, I'm drawn to books about school shootings. (That sounds awful, sorry.) First, I read She Said Yes, about Cassie Burnall, who said yes when asked if she believed in God. I cried for a long, long time after.

Next, I read Jodi Picoult's Nineteen Minutes in less than two days (I think).

When I'd heard of Hate List, it immediately went on my Christmas list. Thank you Amazon for recommending me this book. And thank you, Mom, for buying it for me. 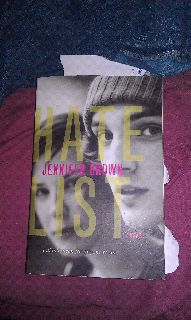 I read this one over the Winter, and I was not disappointed. Firstly, the cover says a lot. Clearly, there is something between the boy and the girl. As I read, I imagined these two, and this boy, who from the cover looks so freaking cute you just can't imagine him shooting everyone...

There were parts where I argued with the author, and the intro took me awhile to get into, but over all, this novel broke my heart.

It's about the girlfriend of the boy who brought a gun to school, and killed a bunch of people. People blamed her, even thought she was also shot. I think the most heartbreaking part, was that even though she was still angry with the boy, she still loved him.

The only big thing I had an issue with was the end, but the rest of the book was so good that I was okay with it. If you get the chance, read this book.

Now to continue my ramble:
I think one of the reasons I'm so drawn to these types of stories, whether it's real life, or fiction, is because it's so tragic. No one will fully know why these kids, these CHILDREN decided to bring guns to school, to shoot other CHILDREN, and then to shoot themselves. There is nothing we can do. But maybe, just maybe, we can prevent future tragedies.

Nineteen Minutes, and Hate List do a fabulous job of telling the story of the kids who bring guns to school, why they do it, what pushes them to the edge. At the end of Nineteen Minutes, I didn't want the kid to even be on trial. I felt like the jerks totally got what they deserved (harsh, but it's fiction, and so well written you had to root for the guy). In Hate List, it was kind of the same scenario. I just wanted to hug him. To make him feel better, to tell him that life gets better. People are jerks, but you can move away, go to college...don't take your life.

I am humbled by writers who explore these things because they write about the bullies, about the kids breaking, and seeing no other way. They give answers to the questions we'll never really be able to ask. I think it's why I'm so drawn to these books, even if I know I'll end up crying.

So what about you guys? Read any of these? Have any thoughts or feelings on the topic?
Posted by Lynn(e) Schmidt at 12:21 PM