Last week's YaLitChat revolved around horror, and the chat went from scary, to super scary. We talked about invasion of space (that feeling you get when you think someone has broken in to your place), what really scares us (monsters under the bed), etc. But the things that scare me the most are the things that happen in my head. That whole, "What is he/she willing to do next?" Conveniently, this saga unfolded shortly after this topic:

I've had my share of horrible living environments. I lived in a place in North Carolina that got infested with bedbugs because of a creepy man in his 50s. Before that I lived with a girl whose dog pooped and peed on the floor so Baxter got a rash, and I got sick for two months.

Then I moved to Maine, and I thought it'd be smooth sailing. My 60-70-80 year old roommate played guitar, talked a bit much when I was writing, but I thought you know, it'd be okay.

Then he and his elderly mother decided to start terrorizing me (yelling, moving/touching my stuff, throwing my food away, locking me out of my room, turning off the heat in the middle of winter, etc), so Baxter and I began staying in my friend's basement. Then, when I returned to the house to get my stuff, he exposed himself to me....and I called the cops. (The arresting officer is a somewhat regular where I work. He's said he thinks he has PTSD from the ordeal. You and me both, kid. You and me both.)

After staying almost two months in my friend's basement, when I found my apartment, I was so blissfully happy. So happy, so excited for the future. The only reservation I had about this place was the driving distance, but soon I rocked out to all sorts of CDs, and on days where I had to be up by 5am, so I could leave by 6am, and make it to work by 7am, I didn't shower (those are overrated, anyway).

The neighbors seemed cool for the first couple of weeks. There was one I didn't like because she is living with her boyfriend, and yet spent 2-3 nights all over another guy (classy, huh?). Only one of those nights she was drunk, and so I was judging her pretty much the entire time she was stealing his hat.

Anyways, we'd sit on the porch, and chat, and try out for ninja warrior. I breathed easy for the first time since November. One of my neighbors invited me over for dinner a couple of nights, another let Baxter out while I was at work.

But, as is my luck with living situations, the crazy set it much too quick.

First, it started with the crazy neighbor next door and the wifi (yes, this was the one with the boyfriend). Then it exploded this last week when I went down to the laundry room to find my Tide laundry detergent in the trash (I'm broke, I had half a bottle left. When you get one day a week to do laundry, this is not what you want to find). So I did what any other passive aggressive person would do. I wrote a note:

It was nice to come down to do laundry today and see that someone has stolen all of my Tide. I had about 1/2 a bottle left.
Whoever you are, please replace. I was hiding it for a reason, and that s#$t is expensive.
Thanks,
Lynn(e)

A bit later, I went to check my laundry, and my note was tapped to my door, with chicken scratch that read:

Next time leave your f@#$ing soap in the house Don't accuse any of us of stealing your s%^t and speaking of s&*t the next time I step in s&*t your gonna hafto buy an extra jug of soap to clean your car. And (neighbor's girl's name) is no longer at your dog watching disposal cos of your being a b@#$h.


First of all, it was hard for me to take this seriously due to all the cursing, the misuse of your/you're, cos rather than cuz, or even because. (I judge people who misuse words.) At the bottom he wrote other threats, and crossed them off (that purple blue streak.)

Let me explain this a bit more. The neighbor who wrote this, yea, he's been in prison for murdering someone. Clearly I'm not comfortable with having me or my car threatened, and so I called the landlord to let him know. Landlord said he'd talk to the guy, and I figured that'd be it.

Instead, after a long day at work, I came home to find this:
So, we're adults, right? We're not sixteen years old. The dude is 32 years old, I can hear him screaming at his girlfriend nightly, she's come over after several of their fights, once when he allegedly threw her engagement ring in the bushes. (By the way, she's only 22.) You can look up my twitter feed because the walls are paper thin and I live tweeted them.

So I let Baxter out the poop night, and we get back inside, and I lock the door because that villainous fear crept in, What is he going to do next? Followers on twitter told me to call the cops, and my manager at work said the same thing. Because it wasn't an emergency, so much as annoying, I figured I'd wait until morning.

But instead of him being crazier, it was the wifi neighbor, who created an account that same night specifically to attack me. She tweeted at me about 9 times, all of which I didn't respond to, but continued to complain about the dog poop, the psycho neighbors, etc. Well, around 11:30pm, I heard her yell something and storm over and start pounding on the door. I told her point blank (through the open window), I'm not opening the door, to go home, or I'd call the cops. She told me to call the cops, so I did.

Well, cop hottie (who is married but let me out of the fine when he pulled me over) showed up about an hour later. He told me this is ridiculous, and I couldn't agree more, but I was somewhat more comfortable because if something happens to me, to Baxter, or to my stuff, there is now a record of this craziness.

I texted a picture of the poop to the landlord saying that he needed to speak with his tenants because this is unacceptable, and by the time I got home from work the following day, the poop was removed from my door step.

None of the neighbors have had contact with me since, though an animal control officer (who walked over from next door), came over yesterday to ask if Baxter was registered because we'd been here for longer than 10 days (yea, bro. We've been here two months. Where were you then?), which leads me to suspect one of them is still trying to make trouble.

I'm very frazzled about all of this. My mangers at work are suggesting a new living arrangement but, I love this place. Not the neighbors, but my apartment. My place to live alone, my punching bag in my bedroom with my air mattress, a mile walk to a river and beautiful views.

But, if we move, it would be closer to work, and I could potentially go home during lunch to let Baxter out. If I could find a cheap place, maybe I could actually start saving up some money.

But if we move, I wouldn't be able to hop the border and head to New Hampshire and avoid sales tax. I'd give up the river, the drive where I get to collect my thoughts (though granted, sometimes the drive sucks). We'd have to give this up: 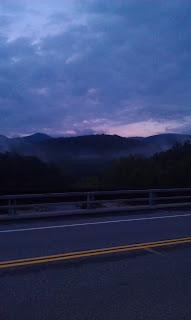 I'm not sure I'm ready to do that, but maybe giving all of this up is better than you know, coming home to a dead dog, huh?