I Was in the Paper!

I've been behind on blog posts because as usual, life is getting in the way. Well, life and sleep. Slept for about 15 hours last night...turns out the weeks of insomnia caught up to me. But I'm trying to be productive again, so here's some news for you.

I was in the paper! Not once, but twice. 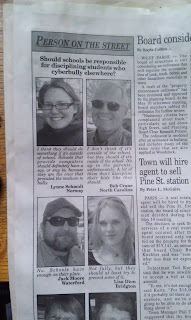 The first time was during my basement dwelling days. I'd stopped to get gas, and a reporter asked me to be a part of their Person on the Street column.

The question I responded to was, "Should schools be responsible for disciplining students who cyberbully elsewhere?"

I basically said yes, I think they should. I've talked about bullying, and hate words, and fun stuff like that on this blog. I believe it is social responsibility; if you know someone is bullying, YOU need to step in and stop it. It's unacceptable. If the school knows, if the school provides the medium, they need to step in.

It was kind of cool to get to say that in a newspaper.

Then, I was in the newspaper again two weeks ago. It was the Real People column. I was asked about my life growing up, my life now, my goals, etc. It was pretty cool. It turned out that the woman interviewing me was a regular where I work. 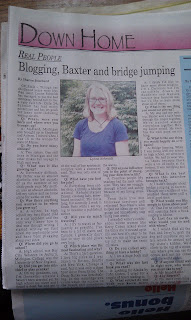 Through an e-mail (because that's the easiest way to correspond with me), she said this:  For as young as you are you have certainly lived a lot of life and seemed to have survived a difficult upbringing to become a fine young woman.  My hat is off to you!

You can read that article, here.

One of my other regulars brought the paper in and asked me to sign it. Others commended me for what I said, and for turning out the way I have.


Just recently, I was a winner in the Tea Tag Contest from Good Earth Teas. (Thanks again for voting for those of you who did!). A reporter has been calling to ask some questions, so it looks like I'll be in the paper again.

That's three articles in a four-ish month period. I kind of feel like a celebrity.

Now, if only one of those articles could be about landing an agent, or you know, getting a book published :)