I Pee in the Shower 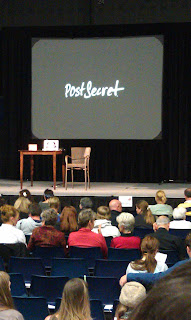 On October 16, 2012 one of my Life Goals had been accomplished. I was in attendance for a Post Secret event and got to meet the founder of the project.

Frank Warren (the founder of PS) has a theory that we all have secrets, and if we keep them secrets they become walls. But, if we're brave and we tell those secrets, it has the ability to turn those walls into bridges (his words, not mine).

One of the most common secrets he said he gets is "I pee in the shower." I'm not gonna lie, I pee in the shower. I feel like a) it's more environmentally friendly and b) it's a time saver and c) Haha, boys. I can pee standing up, too.

You just, you know, pee first, then lather, rinse, repeat.

Anyways, at the end of the event, Frank invites the attendees to go to the microphones and say something. It can be a secret, it can be a thanks for the project, whatever. And because a year ago last week, I found out I was pregnant, and suicide was a better option than having a child, I went up to the mic. I told my story, about writing "If I test positive I'm going to kill myself," and mailing it in, about having an abortion, chopping my hair off, changing my name, and moving 1,000 miles away.

In that aspect, I did kill myself. But, I'm alive. Because I told my friends and my dog my secret, and they kept me alive when I couldn't breathe.

The last girl at the microphone was small, and adorable. She said something along the lines of, "You know, I've always been a goodie-two-shoes. And when I got stoned out of my mind, I realized I have the best friends in the entire world."

The audience cheered for her. I cheered for her. The fourteen year old version of me who believed that Harry Potter was demonic cried a little inside, but thankfully, her voice is getting smaller and smaller by the day.

On the way home, I called my mom. For the last year I've been hiding what happened, why I moved from North Carolina. And I told her. Then we hung up, and I exhaled. I assumed she'd tell me I was a huge disappointment, or that she was disowning me. Instead, less than five minutes later, my phone rang. It was her.

"I just wanted to tell you that I still love you," she said.

I smiled. My relationship with my mother is a complicated one. I grew up hating her, moved to Maine to get away from her, and now we chat on a frequent basis. I didn't tell her I loved her back, I wanted to, but I couldn't. Instead, I said, "Thank you. Thank you a lot," and we hung up again.