"You're being a fucking cunt."

Yep. You read that right. (Sorry I'm not adhering to my PG-13 status right now). But that quote is what I woke up to at 8:00am. I heard it through my ceiling in the basement. I also heard a million f-bombs, and screaming. Lots of screaming. Though I heard her voice a few times, it was mostly his, yelling f-bombs, calling her the b or c word, and it was just awful. All around.

I ventured upstairs since sleep was no longer an option, got a bowl from the cabinet  and poured some Lucky Charms cereal (because I'm five like that). Then the dude (now standing in the kitchen, too) screamed, "I'm not the one being f@#$ing inconsiderate!"

And because I'm me, I couldn't help it. As I poured the milk in the bowl, I said (not in an angry voice), "Actually, you are being inconsiderate. There were still people sleeping."

He proceeded to redirect his anger at me, and tell me to shut my f#$ing mouth. Then my older roommate (the girl's aunt) also told me to shut my f#$^ing mouth, and that I don't think of anyone else. Um. Right. Then about fifteen minutes later, she asked me for dishsoap...which I got, pissily.

Moral of this story is, yet again, I cannot cohabitate with people and it brings us to another list.

Signs that You May Be in an Unhealthy Relationship

5) They don't support your dreams.
If you want to be an astronaut, and they buy you a cowboy hat for Christmas, things may be in the fritz.

On my 16th birthday, the boy (who you'll read about in #1) I was dating made me breakfast in bed, and then gave me presents. There was a large pack of pretty metallic colored gel pens.
"I saw you were running low," he said, like he wasn't sure I'd love them.
I was speechless. He knew me. He got me. He supported my journaling, my writing. Me.
He also wrote, but he was terrified to speak or read in public. By the end of our relationship, I was in attendance when he decided to read at an open-mic night. Even though he barely spoke loud enough to be heard through the microphone, I'd never been so proud in all my life.
Recently, I was talking to a boy (who'd been asking me out), and I mentioned being in the newspaper. I told him, "You should be impressed, I'm a pretty big deal."
And he laughed. It didn't feel like he was laughing with me.

4) You are genuinely afraid they'll hurt you
Safety is a huge thing in a relationship. Maybe you want to reproduce with this person. Maybe you want to adopt. Maybe you want to know that when you come home there won't be knife marks in the couch and your tires won't be slashed in the driveway. If you start to feel afraid of your partner, chances are you should trust your gut instinct and bail out.

3) Dominance
People like to say, "We can see who wears the pants in that relationship," like it's a bad thing. And it can be, if the same person is always wearing the pants. The pants should be traded back and forth. There should be an equal amount of give and take. If one makes the dinner, maybe the other does the dishes. If one does the laundry, maybe the other gets to pick the movie. If one wants to go to a club, and the other HATES clubs, maybe make a trade. Next time you'll do something you don't like because they like it.
You don't own someone in a relationship. It's not meant to be my way or the highway. Talk things out, build a life with each other. Come to an even playing field.

2) They don't realize they've hurt you
"Hey, hey, look!" From the driver's seat, I reached behind me, and pulled out a pink covered book. My Friend Leonard, by James Frey. I'd been gushing about it for weeks, and I'd finally gotten it back in the mail. That day! 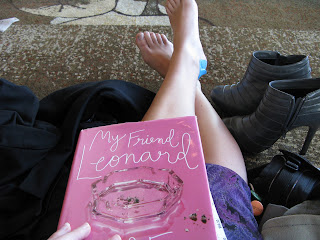 My boyfriend, in the passenger seat looked at the cover, put the book back in the backseat, and said, "Cool."
He didn't open the cover to see the signature, and the kind words James had written. He didn't act excited that I'd been checking my mailbox religiously to see if the book had come. I was crushed. I almost started crying at the steering wheel. I'd told him about that book and what it meant to me a million times. It's okay if he didn't remember why the book was so important to me, but it wasn't okay that he didn't ask why I was so excited.
He didn't even notice I was upset.

1) Fights.
"Maybe if you hadn't been born your father wouldn't have left."
Yep. I said that. In high school. To the boy I was head over heels in love with. And after the words fell out of my mouth, I stood there, hand over lips, with a look of shock on my face.

I couldn't believe I'd just said that. It was the most hurtful thing I'd ever said....to anyone. And I said it to the boy I loved! I knew I'd hurt him (and I'd like to think I apologized, but I'm not 100% sure I did....because it was high school and it was my way or the highway).

Remember, if you love someone, you still want to protect them. Calling them names does NOT help put the fight into remission. Making someone cry harder doesn't help, either. Neither is helping reach the goal of the end of the fight. It's escalating it.

Also how often are you fighting? What are you fighting about? Fighting is a normal part of a relationship, but if it's happening every day, chances are there is a serious problem that's not being addressed. If you're just trying to hurt each other, that's not a good thing.

Moral of this post is if you're being treated poorly, please remember that you deserve better. You should never tolerate being called names, being yelled at until you cry, or people saying you'll never reach your dreams.

Keep your head up. Happy Monday.