This week for the Express Yourself Meme is: 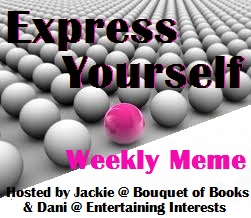 List the five books/movies that caused the hair to stand up on the back of your neck. This also works out, because I love lists :)

So here we go:

5) Paranormal Activity 1
Okay, in all fairness, this one wasn't so creepy. Until I got home that night, and there was an attic connected to my bedroom, and I was like "OMG, did the bedsheets just lift?"And then I curled into the fetal position, clutching my Eeyore. Not a pretty sight.

4) Harrison Bergeron, by Kurt Vonnegut
Okay, so it's not a novel, but it's a short story that scared the crap out of me. It's a dystopian short story where everyone is average. Smart people have things in their ears to break off their thoughts. Athletic people are weighed down by sandbags so they're no faster or better than the people beside them.
And just as the uprising starts, it gets shot down.
This story ripped my heart out of my chest, and made me fall in love with Vonnegut's work.

3) Pet Cemetery 2
First off, the step dad killed the dog. And then there was the motorcycle scene? This movie still gives me nightmares, but really, as soon as an animal dies, I start crying.

2) Night of the Living Dummy, R.L. Stine
There is NOTHING more horrifying than an inanimate object coming to life. And when you're in middle school (or elementary), and a dummy starts torturing you...you know it's the end of the world. The Chucky movies rival this place, but either way, dummies and dolls scare me to death. Dummies and dolls and clowns. And then to have them trying to kill you? No way. No effing way. I never had dolls growing up because I was scared they'd cut me when I slept. I had stuffed animals, because if they were gonna come alive, they'd defend me, and if they tried to eat me, at least they'd be cute.

1) Paranormal Activity 2
This one made me about pee my pants. Where the first one wasn't so scary until you got home, this one made me TERRIFIED to go home. I literally shook for about two hours after the movie, went to my boyfriends house, where he (also scared crapless) stated, "We're watching a funny movie, and sleeping with the lights on. Whoever falls asleep first, wins." He fell asleep first. I was afraid to leave the bed and go to the bathroom.

And if you're wondering, I haven't forgotten about the post from the race. I just haven't had time to upload the pictures and write about it yet. Should be up Friday!

ALSO--I saw that there is a blog hop, something like "Did I notice your novel" and I think it happens October 17th....Um...Does anyone know who is hosting that one? I can't seem to find it again....(My bad)