Welcome to the 2013 Dog Food Challenge.Earlier in January, I posted some information about the 2013 Dog Food Challenge. Basically, I have four people and myself. On Valentine's Day (because we hate V-Day) we're going to circle up, and delve in to some canned dog food. Some of us for research. Some because it's also a fundraiser...(we're each aiming to raise at least $10 to donate to the local animal shelter, we'll see if that actually happens) and some well... I guess we'll find out why they're doing it. 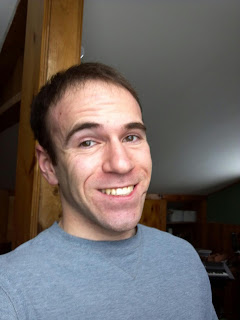 I met Billy a few months back at the road race. He was a friend of the Partner in Crime and it turns out that he also snowboards. After a few rounds of hanging out, I decided to ask him, 'Hey, do you want to eat some dog food with us?'

He asked why, and I explained about the fundraiser and the research and he jumped on board.

Stay tuned to meet the last two contestants (though you already know me, so really there's only one more :) )