D is for Drinking Til You Puke

This might be doggie-flaw week. I really enjoy pointing out all of Baxter's flaws, so you guys truly know what kind of monster he is.

If you guys grew up watching Mortal Kombat, you're told that The Element Which Brings Life is Water. For some reason, Baxter believes this whole heartedly. I understand he's a big dog, so he gets more water than say an ankle biter does, and while he hates rain, and rivers, and oceans, he loves drinking water. 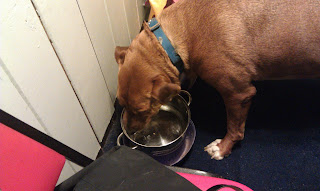 After the Great Baxter Caper, I had to adjust to being a pet parent. I bought toys he hated, treats he refused to eat. For awhile, I always kept his food and water bowls completely full.

Until one day I was sitting around, and I heard the coughing. The coughing turned to gagging. The gag turned into...well, you know.

Every day, it kept happening. So I started paying attention. I learned that he'd only puke after he inhaled lots of water.

Now, my ears are tuned to the sound of him slurping. I usually give him to the count of ten before I say, "Hey." If he starts again, he gets a count of five. People who don't know this about him will stop me and say, "Dude, he's just drinking water."

But they don't understand....if I let it get out of control....
BAD.NEWS.BEARS.

But thankfully, he usually aims in places that aren't occupied by my clothes, papers, or computer.

A few months ago when we were living in Most Recent Creepy Situation, I came home and there were 2-3 piles of puke on the floor. One of them had splotches of blood in them. I FLIPPED out, and took him to the vet (who we now live next to, literally) the following morning.

"So what's the issue?" the woman asked as she scratched him behind the ears.

In the end, he was okay (just must have eaten something that didn't agree with his tummy), so, I guess I can still love him. Until he decides to run off on me again...